The Darshan of Melani

I have been looking at this blog post of mine on Google and Isabelle. The photos of the women at the end have to be scrolled through one at a time, and a few times on scrolling through them I sense a kind of grace in looking at them. It is as though the beauty of the pictures is some kind of blessing, that it is some divine kindness which has made the images of those women available to be witnessed. In some way I have come to the conclusion the picture of Melani is the one which contributes the most to this feeling. Somehow after scrolling past hers the feeling just comes up - that I have had some kind of blessing, a gift of some sort merely by seeing this photo.

I don't know whether it is on account of her showing more skin on account of her attire. I just feel that as a black person God has given us such beautiful black women, and some how the sight of them as they are is a gift in its own right.

Living in the UK's temperate climes all year round it is only in summer that the Sun comes round to tan the women's skins properly, when their skins truly glow. Some women are blessed to have smooth satin dark skin all year round, but for most women it is only in summer that their skins develop that tone. There is something about the skin's apparent ability to absorb the Sun, especially with black women whose skins can absorb the Sun's energy without burning. Some how the skin gives of this sense of being able to capture and store the Sun's energy in some way, refine or transform and slowly release it.

This is the impression that this picture of Melani creates in me. There is something so divine about the reflection of light off her broad bejeweled forehead and her cheeks, and those lustrous curls are equally so. Top it off with the gold and silver necklace around her neck, the beautiful reflective tone of her arms and shoulders, the vermilion cloth wrapped around her and she is such a sight to behold. You can also see how much more beautiful she would look if the light had a more golden tone than the white tone it is. 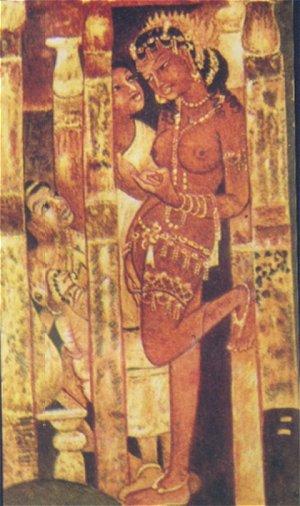 Her jewellery and her curls remind of the this image from Ajanta in Deepa and Diya The complexion of the woman there is more like Archana Rao and Sapna Parikh but you get the drift. The larger set of images from Ajanta and Elephanta has more then enough Melanis in it. I will have to take the time to locate one which does more justice to Melani.

When you observe the paintings and images from the Ajanta and Ellora caves you are struck by the richness of the colors, though faded and deteriorated, and the sheer artistry and attention detail which went into them.
One has to wonder whether the sight of the live scenes from which the pictures were drawn instilled a sense of wonder in the artists, probably monks, who created them. Perhaps they had the feeling of darshan, the feeling of witnessing scenes from heaven that the above photo of Melani stirs in me, and that it was a factor in the dedication and diligence they applied to these paintings and sculptures.
The scanty clothing, even the very absence of it seems so natural. If fact looking at this paintings causes you to wonder whether the beauty of dark-complexioned Indians is hidden under the clothes the Indian man and woman of today wears, especially the saris, whether the lightly-clad but bejewelled dark-skinned Indian can instill the sense of darshan Melani instills in me.

One in which the naked human form is seen as it is, free of sexual connotation and stirrings, and fully expressive of its divinity. After all isn't darshan nothing other than the sight of the beautiful black form of Krishna?

On getting back to the cave paintings it is easy to see how so many of the subjects in the paintings are dark-skinned Indians, the Indians who are the subject of so much color prejudice today.

Was it a different India then, a truer India, India as it was before the Mughal invasions and the later British Raj, where the Indian who is subjected to prejudice today ruled?

India as it was before Mughal inspired saris became the norm, an India without so many lighter skinned inhabitants requiring more clothing to protect their delicate/maladapted skins from the Sun, and thus get to associated loads of fabric with higher status?

Take all the beautiful richly adorned women in the paintings, whose adornment was an indication of their status, all the asparas and yoginis depicted in the paintings and sculptures all over India, Indonesia and South East Asia. Imagine them all of them in glorious Technicolour and ask yourself - "How many of this lightly-clad, princesses, asparas and yoginis had to avoid staying in the sun because it would make their skins darker?"

When Kunti prayed to the Sun and begot Karna did she then have to avoid the Sun to avoid getting duskier?

Did Draupadi, when traipsing through forest, plain and desert during exile every worry about avoiding the Sun because it would make her darker, despite being called Krishna on account of her complexion?

When Ravana captured and flew Sita all the way to Sri Lanka and did she worry about getting Sun bronzed?

Imagine an India where people don't mock their close relatives on account of their complexions, and grandmothers do not refuse to pick up their grandchildren because of their dark skin, and grandfathers do not go into mourning because their granddaughters have come out dark.

Is that the India depicted in those paintings?

Looking at Melani can you believe that her complexion and hair texture were the butt of so many jibes in her native Sri Lanka, that it was when she moved to Canada that she found herself among West Indians who appreciated her beauty, made her feel at ease with herself and got to feel loved and appreciated by the people around her?

Melani your photograph has been darshan to me, as I am sure it has and will continue to be to others. What more vindication is there of your form?

Perhaps this post should be titled - The Melanin of Darshan.